Esfahan is half the world. Once the magnificent capital of Shah Abbas’s Safavid Empire, Esfahan is brimming with historic delights, some of which date back to pre-Islamic Iran. Get acquainted with the historic Royal Square of Isfahan Registered as a world heritage, visit picturesque Royal mosque. Sheikh- Lotfollah mosque and Aliqapoo palace and Masjid-i Jarchi.

The Masjid-I Jarchi is located in the heart of the Bazaar of Isfahan, Jarchi Mosque was built in 1019 AH by Malek Sultan Jarchi Bashi, near the Grand Bazaar of Isfahan. It has no courtyard, and is actually like a shabestan.

along the vaulted arterial street that runs from the northwest corner of the Maydan-i Imam to the southeast corner of the Great Mosque. Its entrance is an elaborate muqarnas vaulted iwan that opens onto the street on its west side slightly below street level, along the stretch north of the Sadr Madrasa and south of the New Mosque (Masjid-i Naw).

The face of this entrance iwan is decorated with vegetal patterns in tile mosaic. Benches line its walls and a stone water basin was placed in the center during the Qajar period. The side walls are articulated with arched niches, the tops of which have tile mosaic lunettes. A large stone inscription band runs above these and just below the muqarnas vault, naming the patron (Jarchi-Bashi) and the date of construction.
The inscription on the monumental portal of the mosque is designed with calligraphic art work. Decorative tile works with dark blue color theme is also used to design the Shabestan. White and brown color flowers are other ornamentation on the tiles. Among these decorations, the white and russet flowers are more obvious.
The altar of this mosque is made of marble and the materials like tile, stone, brick, plaster, and even wood. In some mosques, we can see several alters that indicates a large population or the existence of different beliefs and prayers; although this mosque is small, it has two altars. The Ivan at the entrance of the Jarchi mosque  (the portal of the mosque) is designed with beautiful Muqarnas works.
In the past, people made doors from plane or walnut wood, so that the xylophagous cannot cause structural damage to the doors; the entrance gate of this mosque that remained intact, is considered as one of the interesting historical monuments of Iran and it seems that it is also made of plane wood. There is a small stone-trough in front of the entrance gate of Jarchi mosque; stone-troughs are among the decorative and ritual objects in the religious buildings.

Naqsh-e Jahan Square (also known as Imam Square) is the overwhelmingly impressive central attraction of Esfahan, which features a number of architectural wonders. At the southern edge of the square, which stretches over half a kilometre in length, is the Imam Mosque (or Shah Mosque). Completed in 1629, the UNESCO world heritage site is arguably the premier example of Iran’s Islamic architecture. Intricate blue-tiled mosaics, splendid Quranic calligraphy, glittering iwans, towering yet delicate minarets, perfectly geometrical floral motifs – the dazzling aesthetic unity of this structural masterpiece is widely regarded as one of the most beautiful mosques in the world.
Along the eastern side of Naqsh-e Jahan Square is the no less inspiring Sheikh Lotfollah Mosque. Finished ten years earlier than the more substantive Imam Mosque, Sheikh Lotfollah is notable for its golden-creamy tile work and complex arabesques, not to mention the imposing central dome – mesmerizing from both the inside and out. Unusually lacking in minarets, the mosque was originally intended for private use by members of the royal court, and was designed by Sheikh Bahai during the reign of Shah Abbas.

Opposite the Sheikh Lotfollah Mosque is the towering, six-storey Ali Qapu palace, a royal residence used by Shah Abbas to host visiting dignitaries. Completed at the end of the 16th century, it houses various paintings and frescoes, and the columned terrace boasts exceptional views of the square and its mosques. Depicted on the reverse side of 20,000 Rial banknotes, the palace is a national treasure, although much of the building fell into disrepair under subsequent ruling dynasties. The sixth-floor music room is a particular highlight for the wonderful shapes cut into the walls and ceiling.

Chehel Sotun, meaning “40 columns”, is another surviving Safavid-era palace which now functions as a museum. The twenty slender wooden columns at the front of the palace double in number when reflected in the long fountain (hence the name), and are surrounded by well-maintained gardens. The interior is filled with magnificent frescoes depicting scenes from Safavid court life. Look out for the moustachioed Shah Abbas playing host to a fabulous royal banquet.

The main entrance to Esfahan’s Grand Bazaar is along the northern edge of Naqsh-e Jahan Square at what’s called the Qeysarieh Portal (check out the quaint teashop up the stairs to the left). The Bazaar is a higgledy-piggledy collection of alleys, caravanserais, and madrasehs, with light-holes punctuating the domed, high ceilings. Most of the bazaar was developed in Shah Abbas’ 17th–century building frenzy, although some parts are far older. From touristy knick-knacks to the finest Persian carpets, this bazaar has it all.

Si o Seh – literally meaning “33 – Bridge” is so named due to its 33 arches that stretch across the Zayandeh River. Built at the turn of the 17th century, the bridge extends to nearly 300 metres in length, making it the longest bridge in the city. Beautifully symmetrical, and especially atmospheric when lit up at night, Si o Seh Bridge is one of Esfahan’s most recognisable landmarks and a fine example of Safavid bridge-building. The adjacent teahouse is one of the only ones left along the river and well worth a visit.

Dating back to the 8th Century, the Jameh Mosque has undergone numerous remodelling and renovations over the centuries, making it an eclectic mix of Islamic architecture, featuring contributions from the Seljuks, Mongols, and Safavids. Located to the north of the Grand Bazaar, the two Seljuk brick domes are arguably the mosque’s most celebrated aspect, although the entire complex – replete with a glazed tile work and ornate motifs – is a delight to behold.

Vank Cathedral In the early 17th century, hundreds of thousands of Christian Armenians from northwest Iran were resettled in Esfahan by Shah Abbas – Vank Cathedral is the most impressive of their subsequently constructed places of worship. The outside of the cathedral is fairly plain, yellowy-brown brickwork. By contrast, the inside boasts elaborate and colourful frescoes, containing some disturbing depictions of the terrors of hell. There is also a fascinating museum (which displays Shah Abbas’ original edict establishing the new Armenian town). 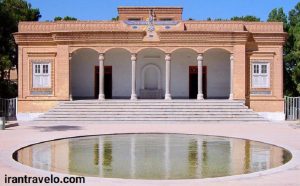 This Sassanian-era Zoroastrian fire temple is located on a hillside just a few kilometres to the west of Esfahan. A short climb will be rewarded with an excellent panorama of the city and the river, and the crumbling remains are a poignant testament to Esfahan’s lengthy and turbulent history. Early morning climbs are particularly recommended for a moment or two of serene contemplation.